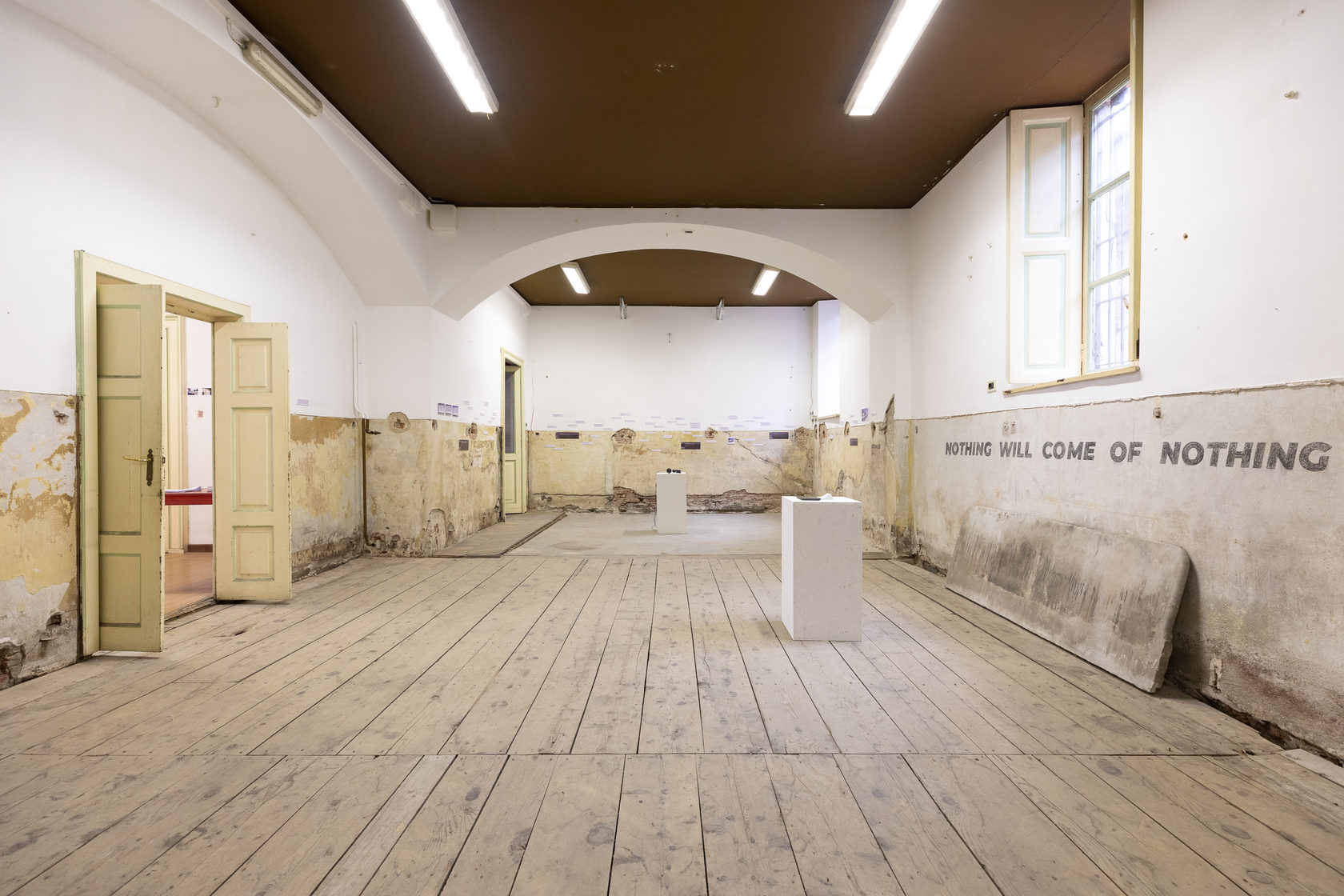 Nothing Will Come of Nothing
Video, audio, digital prints, text, 2019
Exhibiton in Circolo Cavalerizza (Torino, Italy)
Curated by Yuliya Say
Ex nihilo nihil fit: nothing comes from nothing. According to this conception, present in Western thought since its origins, nothing can be created out of nothing. The exhibition of the same name is the negation of this principle, as it is, on the contrary, the assertion of the need for an empty space, a container which is able to hold any kind of content.

«Linguistic unit is an empty module that fills itself with connotations, depending on the beholder».

Nothing will come of nothing – the artist's first exhibition in Italy – develops around Three Billboards, a constantly evolving project, which started in 2018. It took its inspiration from the movie of the same name, «Three Billboards Outside Ebbing Missouri», a 2017 movie: a work of art that deals with the power of words and the strength that their messages are able to convey. The image of three billboards, conceived by the director Martin McDonagh, was so incisive that it influenced the audience, which appropriated it in order to convey their own messages, mostly in the form
of memes and photomontages. Absurd sentences, anecdotal expressions and other memes' quotes replaced the movie's seriousness. That's exactly the phenomenon which aroused the artist's curiosity and pushed her to further investigate the subject.

Three Billboards is the artwork's reduction to an empty space, language's ground zero: an installation that fills itself
of content throughout the spectator's fruition. The only thing the artist did was setting up a situation that developed itself in an unpredictable way.

After its online upload, the project proved to be able to trigger a chain reaction made of conflicts, agreements and other following acts. Each of those reactions touched a specific sore point of contemporary Ukraine society. The most heated kinds of criticism addressed towards what has been perceived as a useless waste of money. Money that wasn't spent
for entertainment reasons or for a «worthy» piece of art, or not even to help needy people, but in order to create emptiness: a gap in the infinite flow of images which is typical of the contemporary age.

Up until now, Three Billboards has always been narrated and retransmitted over the internet, thus keeping on generating small stories around it, and it has never been disclosed in its entirety. Contextually to the exhibition
at Circolo of Cavallerizza, the project offers itself for the first time in an overview, where the single fragments
are put together in a tale and in a texture of relations and complementary reflections.

The exhibition's title, Nothing will come of nothing, comes precisely from a negative comment received online about the work's sterility. A comment that the entire exhibition aims at proving wrong, by collecting and displaying all the things that the work generated – as well as by telling how it was generated. The most significant and iconic reactions generated by Three Billboards are displayed in an intelligible way, by showing how the work has been able to receive and retransmit the space-time issues in which the work unfolded.


(From curator's text by Yuliya Say)
The exhibition is split into two sections: History and Stories. This is because, as the artist claims, the history
of the creation of the project and the viewers feedback on it – is an integral part of it.

History is about what was «behind the scenes» of Three Billboards project. About how Fedorova has raised the necessary funds to rent the posters, about her interaction with the advertising agency, and so on. It also represents
the testimony of the difficult condition in which young artists work today, not only in Ukraine.

This section includes information about the cost of living in Ukraine, from vegetable prices to the rental
of an apartment. Rather than providing a list of financial data, History wants the viewer to immerse in the socioeconomic reality of the country, allowing him to contextualize the reactions the work received,
which are contained in the Stories section.

Then follow some photographs of the bills for renting the billboards in their actual quantity:
27 bills of 200 UAH (Ukrainian hryvnya); 1 banknote of 100 UAH.

Finally, the screenshots of the emails containing the press releases, sent to the various national and local cultural realities hoping for some find of feedback. No response received, except from the one online magazine,
which published the proposed content.
Stories is about what happened «after», the storytelling of what Three Billboards generated.

The Facebook comments are presented, both the ones received under the original post, both the ones under
the numerous reposts, along with comments from local information portals. Like in a «chinese whispers», authorial control has gradually faded away, giving way to more heterogeneous interpretations and manipulations by the public.

Among the various photomontages created, one was directed against the mayor of Kharkov in charge at the time,
just like in the homonymous movie. Even if the artist tried to «go beyond» the feature, a spectator returned
the original narrative function to the billboards.

The video depicting the three billboards was also presented in a virtual exhibition on the British platform Skelf space. During the podcast concerning Three billboards, the two curators commented on the work, proving to be curiously strangers towards eastern Europe and its own landscapes: Ukraine is to them something distant and unknown,
they are even amazed by the cyrillic writings. A «westerner» vision, as they defined themselves, towards a «space
of anywhereness». The presence of billboards along the highway is experienced as a violent eruption of «wild,
rampant capitalism" in an otherwise pure, pristine space. The three Fedorova's billboards are obviously exceptions.

Finally, the conversation with her art history teacher, editor of one of the many art magazines in Kharkov.
He commented on the project: «Nothing will come of nothing ... The project told me nothing. [...] But to me it's very important for an artist to express himself. Therefore, I will publish your project».
The exhibition's title comes from this comment.


(From curator's text by Yuliya Say)
BACK
Made on