Modernes Deutsch
Video, Youtube-channel, 2019
In every city I visit I explore the communication on the streets – how different groups of people speak out in the public spaces using the means of graffiti, stencils and tagging. From this I learn a lot about the context of the particular city – about its major political and social discourse and its main actors, the most discussed questions and most painful problems. During my residency in Graz (Austria) in August 2019 I found out that this «street communication» is quite active there – but due to language barrier I couldn't easily read the texts on the walls. I had started learning German only two months before, and my knowledge was very elementary. So I googled every word I saw on the streets, and little by little learned them. And soon to my elementary level vocabulary was added the very specific vocabulary of anti-neoliberal, anti-capitalist protests and slogans of the left-wing, anarchistic movements.

It was very interesting to me to find out how the specific environment in which you learn the language forms your vocabulary, defines your perception and application of the language. Every language learner wishes to learn the very language the «natives» speak, and there are variety of courses offering them to do so. As well as the numerous services offer to the modern millennial tourists «to get the locals' experience» in their travels.

The language I learnt in Graz can certainly be considered «the modern German» – after years of being non-conformist and underground, today it became the one that is on almost everyone's lips in the Western world. So I created my own language learning course which may help foreigners like me to learn the language that is actually spoken today
on the streets of Berlin, Vienna, Munich and Graz.

But actually what is clear nowadays that this «act-as-a-local» way of traveling does much more harm to the local communities than the regular tourism used to. Travelers who perceive the aspects of «local context» as an amusement, and companies who perceive them as a commodity to be sold, literally take it away from the actual «locals». So that
«the local context» becomes a simulation, a fictional construct created through the vision of the «foreigners» and adjusted to suit their needs – and to generate greater profits for the companies. The same with «modern language» – we can see it how the big capital appropriates it in order to «speak the same language» with the millennials (who are today's main consumers) and sell them more their goods. At the same time, what they do is very different from what they say. They stand for the feminism and body-positive, while still have their productions in the poorest countries where women hardly have even basic rights; speaking out for the democracy and freedom of speech, they ban any critics against the government of China, etc. By this sort of «acting-as-a-local» (in relation to the millennial audience)
the capital quickly but insensibly expropriates this language from its «native-speakers», takes it from the streets in order to bring it back on the billboards and fancy T-shirts, through commodification reduces it to nonsense.

In this work I tried to explore this situation. My video mimics every language course which can be found on the YouTube, with the specific visual and verbal language. In it I used the exact phrases I found on the streets of Graz,
but which are at the same time quite common for anti-capitalist, anti-neoliberal discourse in different languages.
I illustrated them with the images I found on the photo stocks, which I consider the sources that quite clearly demonstrate how business and market sees things – expressed through the simplest, superficial, easily perceived
forms and symbols, so obvious and trivial that they even became annoying and tasteless. And in this form, the original meaning of the phrases is lost – they become no more than just a couple of words which you learn in order not to get lost on the streets of the foreign city, equivalent to «Thank you» that you say to the waiter in his native language
to have some fun and feel proud of yourself.

The work created in frames of the joint project of Municipal gallery (Kharkiv, Ukraine) and <roror> association
for contemporary art (Graz, Austria), and firstly performed on the exhibition «I Don't Feel Free to Do What I Want»
in Municipal gallery in October 2019. In 2020, it was exhibited in the second part of the show, in the space of <roror>. 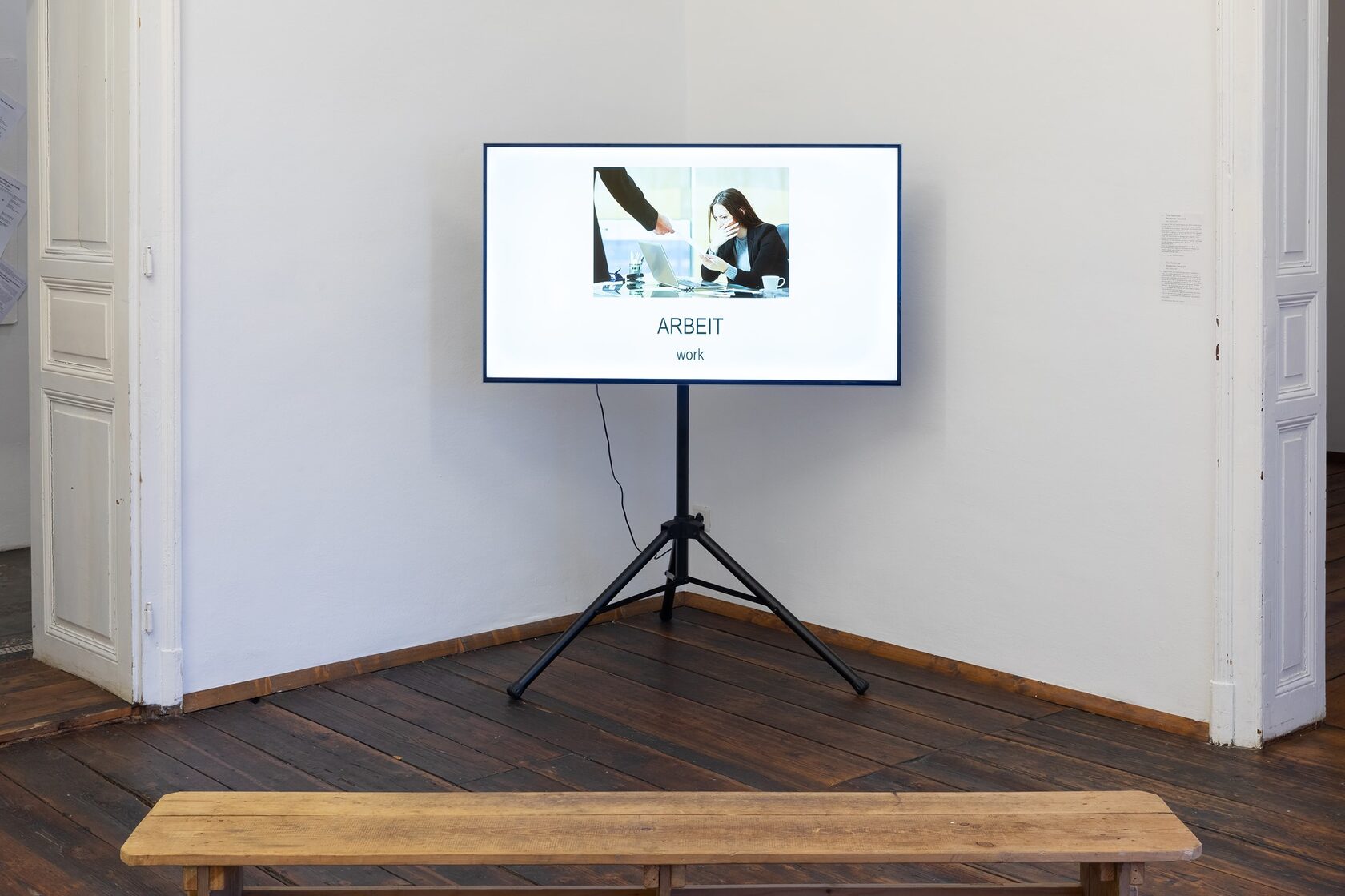