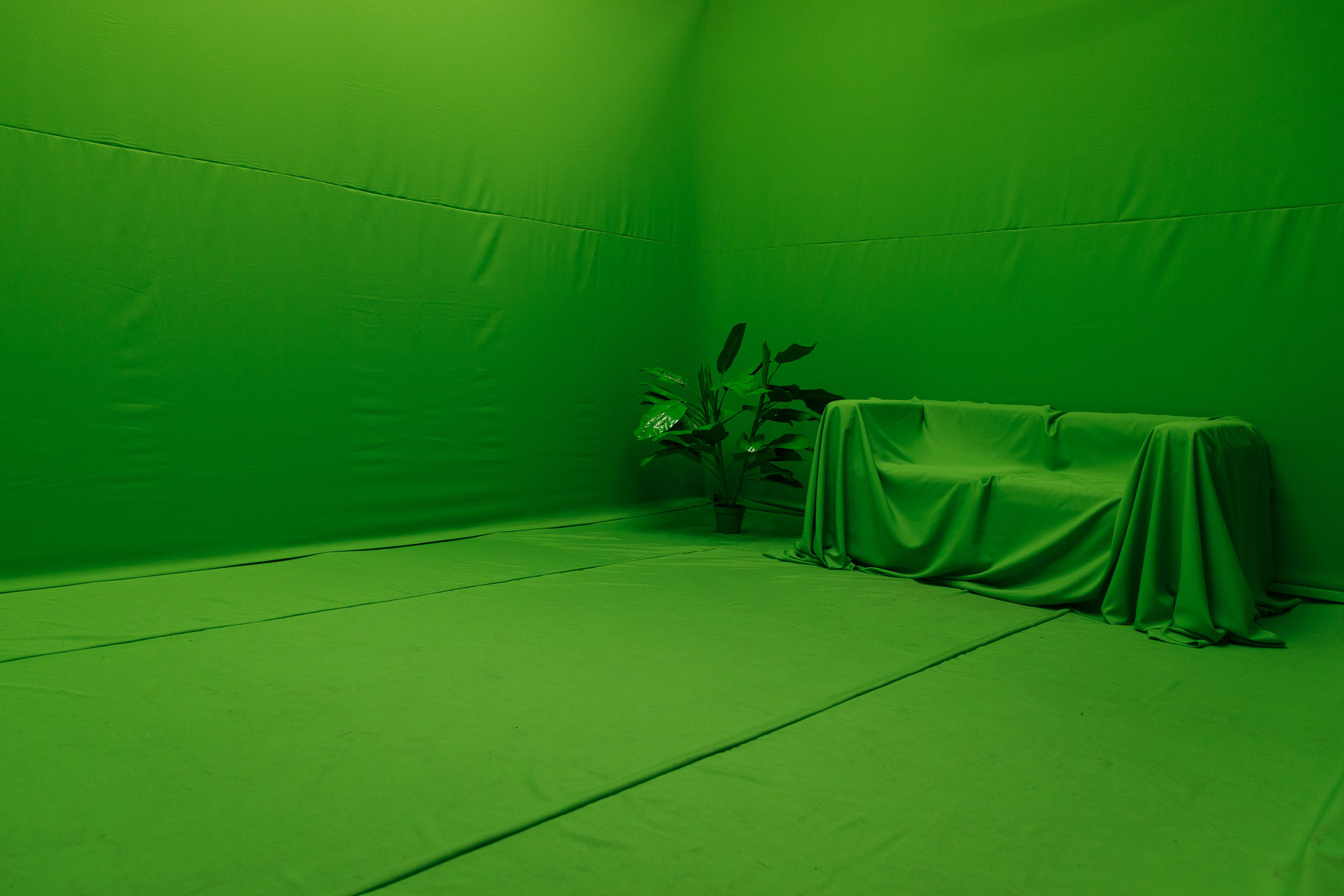 Any Coincidence With Reality
Is Random
Digital print, video, environmental installation, 2017
Chromakey or «green screen» is a background used in the film industry, where a new reality is created with the help
of computer graphics technologies. When we watch films, we still hope that beautiful landscapes exist in reality,
and the fire of explosions and fires really burns. Often, guessing about using chromakey, we feel cheated. The insult
is caused not only by the fact that the proposed picture is not real, but how strongly the simulation tries to convince
us of its reality.

The exhibition «Any coincidence with reality is random» was opened in the gallery «ArtSvit» (Dnipro, Ukraine)
in April 2017.

The project consisted of three parts.
The first part is based on my 2016 year's project «Chromakey».

Chromakey («green screen») is a concept which came to our life and language from film-making sphere with digital technologies developing. It is a background on which is possible to draw everything using computer programs.
When the initial enthusiasm about possibilities in creating new realities subsided anxiety and distrust came to people's minds instead. In the times of simulacra and hyper-reality when we are not totally sure what around us is real
the «green screen» has become the most obvious and demonstrative simulacrum. While watching movies we still
have a hope that beautiful landscape and fantastic machines which are being shown to us on the screen are real,
and the special effects really can bring danger. But when we notice or intuitively suspect chromakey presence
we feel ourselves betrayed by how the simulation tries to persuade us that it is real.

This project is a series of famous photos of events which have influenced on world history, on our lives, society, people around. These are the images of wars, revolutions and catastrophes. Photography is a medium which impresses with clearly understood realism of depicted events. Nuclear explosion in Nagasaki, Vietnamese children burned with napalm, lynch processes in America of 30's – all these events really took place in our past and real people participated in them, people like us. This understanding makes photos tragically serious and important. We respect these images and
we respect these events, make them sacred. Virtually placing these events on the «green screen» I move them from
the sphere of reality to the cinematographic sphere – from the sphere of full understanding of their realism to the sphere of absolute surrealism. This action is intended to reveal the truly meaning of these events – the things like that should never happen because of their surrealistic, unnatural nature. Terrorism, riots and with them hypocritical political games undoubtedly shouldn't be according to laws of humanism and good sense. The main object of this artwork
is to pull off the veil of significance and weight of these events in the people's view, to critisize the fact that they are still possible to occure. Through the keen sense of the absurdity of what is happening cause the viewer to rebel against that kind of events, against the fact that they are permissible, to replace respect (respect means permission) with categorical rejection of them.

The project «Chromakey» was realized as part of the festival of youth projects in the field of contemporary art
«Non Stop Media VIII» in 2016 in the Municipal Gallery (Kharkiv, Ukraine).

Also in this part I included the four-channel collage of several videos taken from the open online sources. In this collage the documental footage of the famous historical events is mixed with the stills from famous Hollywood blockbusters,
so that the border between history and fiction becomes almost indistinguishable.
In the second part of the exposition, I go even further, demonstrating the uncertain reality of the everyday life.
Collages reflect the deep confusion that accompanies the modern man in the world, which exists at the junction
of reality and «additional effects»: mass media, advertising and propaganda. And if the chromakey in the film industry .
is a form of deception, and we still accept it, then in our daily life we construct our reality by our own will, ignoring something, substituting something for imaginary worlds.

In this part there is also the five-channel video collage, in which I mixed the stills from famous TV and fashion shows, music concerts and news with the videos shot by regular people about their everyday life that I found on the Youtube. In it I show how fancy and fake TV reality tries to mimic a «real life», while the «real life» runs away from itself,
wishing to become a TV show.
And the third step that I suggested to the viewer to do with me together is an installation –
a room of total unreality – inside of which everyone can imagine and design any world around.
BACK
Made on